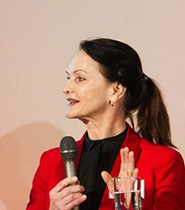 The founder, Professor Karin Büttner-Janz, has an extraordinary professorship at the Charité - Universitätsmedizin Berlin. After decades of experience in the surgical and conservative treatment of spinal disorders and extensive research in this field, which has been documented in hundreds of publications and oral presentations, she became convinced that the "problem spine" needs a further approach. It was with this aim in mind that she set up the Büttner-Janz Spinefoundation in May 2012.

Professor Büttner-Janz has gained international distinction both, as an athlete and in the field of medicine. She was the most successful German athlete at the Olympic Games in Munich in 1972 and won a total of 17 medals at Olympic Games and in World and European championships during her career as a gymnast.

In the medical field, Professor Büttner-Janz is internationally renowned for developing the first artificial spinal total disc, which opened up a new era in the surgical treatment of degenerated intervertebral discs. 2008 to 2009 she was the president of today's International Society for the Advancement of Spine Surgery. In 2008, she was the president of the world's congress for spine surgeons.

She has continued to do pioneering work and has been awarded many patents for the newest generation of artificial discs for the cervical and lumbar spine.

2016 Professor Büttner-Janz became Master of Business Administration (general management) at the Hochschule für Technik und Wirtschaft Berlin. In collaboration with PwC and architects, she developed a new innovative hospital type for more protection against surgical site infections. Spine patients shall also have advantages - because the target is to reduce significantly the number of infections.